here are many great national and local holidays and celebrations throughout the year and all over the country. Every one of the 54,000 parish Churches and the 800 monasteries of the Orthodox Tewahido Church all have at least one minor monthly and one major annual festival. These may share origins with Christian, Muslem and tribal festivals elsewhere in the world, but have unique indigenous characteristics in Ethiopia. If you can, try to plan your trip around one of the following spectacular festivals:
Meskel (The Finding of the True Cross) Celebrated on September 27 at an open amphitheater (Meskel Square) in Addis Abeba with a huge bonfire and priests in splendid ceremonial attire.

Timket (Epiphany) This involves a colourful procession of priests and followers singing and dancing. They carry the Tabots (replicas of the Holy Ark of the Covenant that sanctifies and sits on the altar of every Ethiopian Orthodox Church inside the Holy of Holies) from their sanctuaries overnight. Celebrated on Epiphany, January 19, Timket is the most popular national holiday among Ethiopian Christians. The best venues for Timket are Addis Abeba, Gondar and Lalibela.

Bull jumping and Donga Of the many fascinating rituals, ceremonies and celebrations of the various tribal groups of the Omo in southwest Ethiopia is bull Jumping. This is a rite of passage ceremony in which female relatives of a young man are flogged to bleeding as proof of their affection. This then qualifies the initiate for marriage. In other groups a fierce stick fight known as donga is part of an initiation rituals for young men to become adults and marry. These ceremonies have no fixed venues and times as such. They take place all over the Hamer and Surma lands and, depending on the rains, in February-March/April. 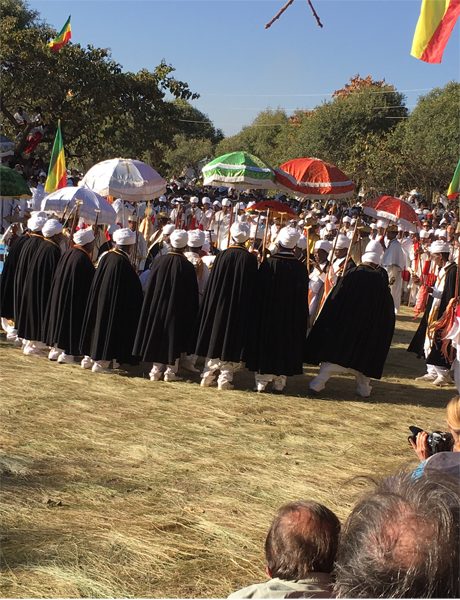