The Danakil Region in the north- east of Ethiopia is the lowest point of Africa and certainly also one of the hottest. At Dalol the altitude reaches 117 m below sea level, which is the lowest point on the continent. The average temperature is 35°C with noon temperatures above 50°C. This deep depression in the desert is result of the rifting process which formed the Red Sea and the great African Rift Valley. Until today volcanic action can be noticed, for example by watching the lava in the Erta Ale Volcano crater. The area also contains salt lakes and sulfur formations, which look like from another planet. The whole region, up to Awash in the East of Addis Ababa, is inhabited by the Afar people, proud and beautiful nomadic herdsmen, who can be seen along the streets with camel caravans, bringing salt bars to the highlands. It is an ideal travel destination for real adventurers, since traveling through this harsh and extremely hot environment is not something that everyone can easily handle. A triangular circuit containing at least the Asale salt mining, the Danakil Depression and a night time hike to the astounding Erta Ale active volcano is all worth the effort.

The trip to and through the Danakil can be started from Mekelle or from Semera/ Logia. An Official entrance permission has to be obtained before the trip and the company of armed guards and a pathfinder is obligatory. 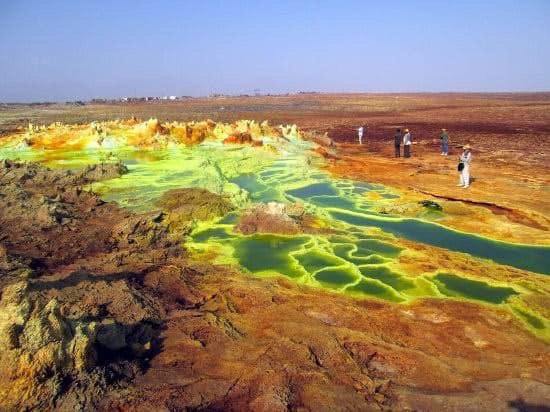