Bahir dar is the nature favored town, sharing the shore of the Ethiopian giant inland water body, Lake Tana. Is glooming. The African largest river, blue Nile(Ghion) emerging from this lake and sweeping a long, the lined tall palm trees, jacarandas and flam- buoyant trees along the main streets and the papyrus reed boats having been sailing since the Egyptian pyramid age! As well the Ethiopian jumbo heart inland water body, lake tana is one of the famous superbly panoramic water escape where the tourists sense an atmosphere of timeless wonder, lake tana is the third biggest lake in Africa next to lake Victoria and Tanganyika! Lake tana with the total area of 3671 kilo meters, stretching 90 meters north-south,62 kilometers east-west, lying at about 1830 meters above sea level and having 14 meters maximum depth is riches in bird, fishes and ancients monasteries, monasteries of lake tana the most breathtaking site, some of 21 monasteries surviving remnants of a very old meditative tradition. Most of the monasteries with some exceptions which dated 14 century AD were established in the medieval period by the monks! The monasteries also house myriads of treasures, beautiful mural paintings, icons, parchment manuscripts, scrolls and emperors assets! They have been used as safekeeping places for the religious relics and art treasures during the times of trouble. 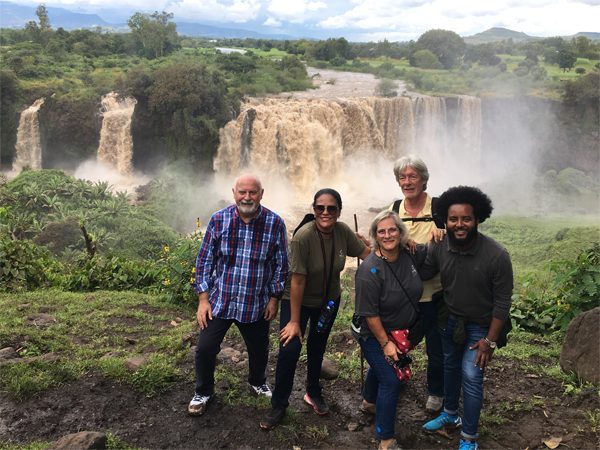 In the trouble periods, these valuable treasures were transferred to these monasteries from all corners of the country, even Ark of the Covenant was kept in the monasteries of tana kirkos, before introduction of Christ in Ethiopia the ark was kept safe for 800 years in this place before it taken to Axum in the 4 century AD! Some of the customs which is used of by the Judaic worship where sacrificial stones are still found!

Bahir dar is one of the natural wonders of Ethiopian especially for its breathtaking falls, the Blue Nile falls near tis Abay town, 35 kilometers south east of bahir dar! The blue Nile falls locally known as tis sat or the water of smoking! That the water stretching 400 meters wide surfaces and plunging dramatically 45 meters deep creates drizzly plethora that in turn produces brilliant rainbows across the gorges of the river! But the falls is seasonal as water is diverting to the power plant!